Me, worshipping Baal at the Bull Site in the West Bank.

HEALTH WARNING: I’m totally unqualified to be writing about the topics I cover on this site. I don’t have any training or qualifications in archaeology, biblical studies, biblical Hebrew/Greek/Aramaic, or the history of the ancient Near East. I’m just an overly-enthusiasic amateur who spends more on books than his wife would like. 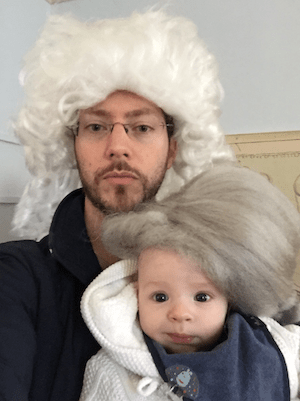 Hi, I’m Nat. I’m a European Christian IT nerd interested in the intersection between archaeology, historical criticism, and faith. I like reading the bible, reading about the bible, and travelling around/getting lost in/avoiding being shot in the lands of the bible. Museums are cool too.

I’m one of a legion of Christians who’ve been on a journey of “deconstruction”; not a term I particularly like. I prefer to describe the process as something similar to art restoration. Over the centuries the Christian faith has accumulated a large amount of dust, dirt, and grime that has made large swathes of it appear small-minded, vicious, and stupid. What was once a beautiful painting has become blackened, with some of the worst damage caused in the past couple of centuries by fundamentalism.1

In the fight against advances in archaeology, historical criticism, and hermeneutics, but more importantly in their quest for certainty, fundamentalists have coupled the simple beauty of the gospel to travesties such as Young Earth Creationism, Piety-by-Literalism, and Inerrancy. In their desperation to “prove the bible” they’ve ignored or dismissed evidence against their interpretations, and fallen for cranks of all stripes. As some Christian denominations progress down this path the faith they demand becomes more and more brittle, often shattering on contact with reality.

It’s got to the point where I’m sick of hearing of faith collapses caused by the discovery that the earth is more than 6,000 years old, that some pyramids predate a purported global flood, that there was no Exodus of millions of Israelites, that Israelite origins are complicated, that Hebrew is not some ‘divine’ language, that the Israelites were henotheists, that text form plurality is a thing, that there are contradictions in the gospels, that the Bible is not a science textbook, etc, etc, etc.

So, I’m going to use this little corner of the internet to show how archaeology, history, and historical criticism are no threat to faith. The aforementioned painting is going to get a good scrubbing.

How did I get here?

Both people who like what I’m doing and those who don’t have asked how I got where I am. So, if you want to read about the journey some random guy on the internet has been on, keep scrolling.

Sailing into the solid sky

After picking up our hire cars in the morning we left Jerusalem behind and drove down into the Jordan valley. First on the itinerary for the day was Jericho. We had a look at some of the site’s archaeological remains and soon arrived at the edge of a deep pit. Looking down we saw the Tower of Jericho – an ancient structure that’s around 10,000 years old.2

“How does that date fit with a young earth?” a friend asked.

After cooling our feet in the river Jordan and exploring the caves at Qumran, we drove south through the late afternoon sun to Ein Gedi. There we floated in the Dead Sea, had some dinner, and spent the evening in discussion out under the stars.

Conversation turned to the Tower of Jericho.

“But what about Genesis 1? When you get into the detail it raises some questions,” he continued.

“Oh? What kind of questions?” I replied, starting to wonder about what kind of heretic I’d invited along on this trip to the Holy Land.

“Well, I’ve heard some people say that when you put the picture together it describes the waters above the firmament as being above the sun, moon, and stars.”

“What?! Let’s take a look…” I said turning up the chapter, curious to see where this idea came from.

We spent a few minutes going forward and backward. I did my best to argue for what I thought was a literal understanding of the chapter but my friend gently showed me that I was reading into the text. It didn’t take long for me to realize that I’d missed something big.

And just like that I crashed –Truman style– into the solid sky.

Seeing through the wrong spectacles, darkly

When I got home from Israel I spent a few days looking into this new topic of biblical cosmology. I double checked what my friend had shown me and found that we’d only scratched the surface.

Learning about the firmament opened up a new world for me. Outside of Genesis 1-3 the first thing it impacted was the flood narrative. The “fountains of the great deep” and the “windows of the heavens” were elements of biblical cosmology I’d read about and raised the question in my mind, “What if the flood wasn’t global?” What if it really was only local, like some wooly liberals in my church believed?

I looked into “universal language”; the idea that wording which on the surface looks like it’s meant to be understood as something global really had a much narrower scope. The passage that really helped me make up my mind was Deuteronomy 2:25: This day will I begin to put the dread of thee and the fear of thee upon the nations that are under the whole heaven, who shall hear report of thee, and shall tremble, and be in anguish because of thee. Even to my limited, conservative way of thinking, it was clear that God didn’t have the Olmec people of Mexico in view.

At this point I found myself looking into more and more topics at the same time. Many aspects of my belief system began to unravel simultaneously – textual criticism3, the textual basis of the KJV4, verbal plenary inspiration5, the date of the Exodus6, multiple authorship of Isaiah, canon formation, second-temple hermeneutics, etc. Looking back, it’s odd that my faith wasn’t the slightest bit shaken, though I have great sympathy for those who struggle when their foundations begin to crumble.

It was becoming abundantly clear that I’d spent years reading the bible through scratched, grubby, and almost opaque lenses – yet I’d thought I had perfect vision. Everything had been filtered through the 21st century, western, English-speaking, and modern glasses perched, without my knowing, right on the bridge of my nose.

I began reading books like Exegetical Fallacies7, How to Read the Bible for All its Worth8, and The Hermeneutical Spiral9 and the scales soon began to drop. One sentence I came across that stuck in my mind was this:

The Bible was written for us, but not to us.

It made a big difference to my way of thinking and has stayed with me ever since.

In parallel I’d been pointed at the arguments for the resurrection as put forward by scholars such as Wright10, Habermas11, Licona12, etc. After reading all sorts on the topic and watching some of their lectures on YouTube I figured that this was the best foundation for faith I’d come across.

It turns out that faith grounded on the resurrection results in Christianity being “true” regardless of what we discover about the nature of the biblical text. And that’s pretty liberating. There’s no need to “defend” the Bible any more; I can swim around in biblical scholarship (as well as a layman can) unperturbed about what I may find. And that’s what I do :)