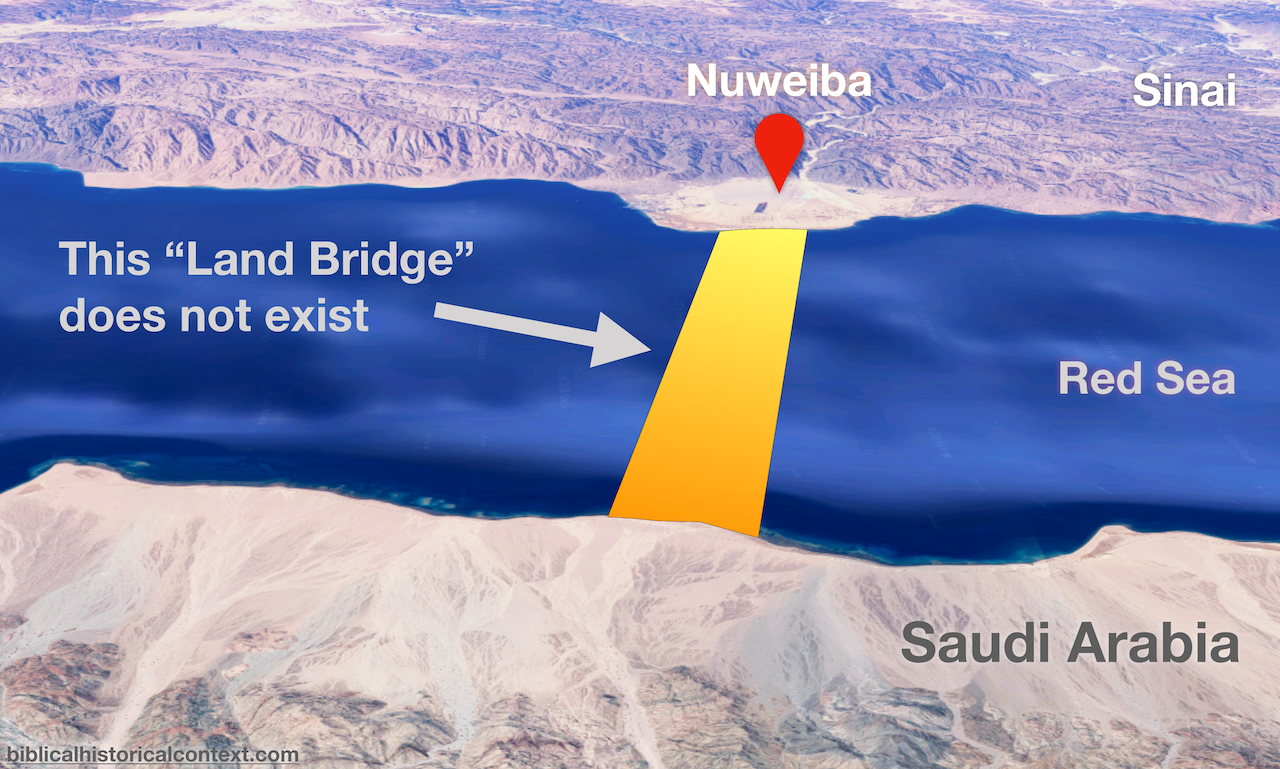 Explanations for the Red Sea crossing described in Exodus 14:21-29 abound, and range from the sublime to the ridiculous. In this post we’re going to look at a claim that’s at the extremely-ridiculous end of that spectrum – the popular idea that the Israelites walked over a purported “land bridge” stretching underwater from Nuweiba, a promontory on the east coast of the Sinai Peninsula, to Saudi Arabia on the other side of the Gulf of Aqaba.

The view that the Israelites crossed the Red Sea at this location has been popularised by nurse anaesthetist and discoverer of Noah’s Ark, the Tower of Babel, and the very blood of Jesus Christ; the late Ron Wyatt. So the idea is off to a strong start…

The following schematic is trotted out as “proof” that there’s an underwater land bridge; I’ve heard quite a few people say that it’s all the evidence they need to accept that the supposed land bridge exists.

I’m not sure what goes on in their heads but I’m fairly confident it’s something like this: Woah! It’s got a grid on it! It looks scientific to me! It must be true! It’s so obvious! Wake up, sheeple!

Sure, it looks nice. But… is it true? Does the land bridge actually exist?

Of course it doesn’t. Simply looking at the area in Google Earth is enough to dismiss out of hand the claim of an underwater land bridge:

In Google Earth hover your mouse along the line between Nuweiba and Saudi Arabia where the land bridge is claimed to be and you’ll find that the water gets up to around 770m deep – that’s more than 200m deeper than One World Trade Center is high. This is not “land bridge” material.

But, let’s get a little more rigorous than simply armchair-swimming with Google Earth around the Gulf of Aqaba…

A fascinating paper in the Journal of Geophysical Research entitled Structural Framework of the Gulf of Elat (Aqaba), Northern Red Sea1 by Zvi Ben-Avraham provides a history of the bathymetry2 of the Gulf of Aqaba. It includes this diagram of the contours of the gulf as drawn by Hall and Ben-Avraham based on their 1978 survey which clearly shows that there’s no land bridge:

With the advent of new technology, has anything changed?

In 2008 an article was published in the Israel Journal of Earth Sciences entitled The Israel National Bathymetric Survey: Northern Gulf of ‘Aqaba/Elat Poster.3 It describes geophysical surveys of the Gulf of Aqaba that took place in 2006 and explains how their data contributed to a bigger picture built up over several decades of what lies beneath the waves in the Gulf.

They begin with a map that documents a scientific expedition of the Austrian steamer Pola that took place way back in 1865-1896. The map is fascinating in a number of ways, but here what’s important is that just like Hall and Ben Avraham’s map above it shows no land bridge at Nuweiba:

Why doesn’t it show a land bridge? Because there isn’t one.

The paper continues with a copy of the poster that the researchers created based on all research conducted to date; here’s the relevant section:

From the original poster available from the Geological Survey of Israel4:

In summary, there is zero evidence for a land bridge between Nuweiba and Saudi Arabia. If there were any evidence it would have been picked up by the many bathymetric surveys conducted since the 19th century. But, none of the surveys found anything even remotely like the purported land bridge. And, it’s not like there’s any sort of conspiracy to ‘hide’ any sort of land bridge – the Straits of Tiran are hardly a big secret and they’re way shallower than anywhere else in the gulf.

So, what is this “Underwater Land Bridge” idea based on? Nothing. Zip. Nada. It’s fantasy, pure and simple.