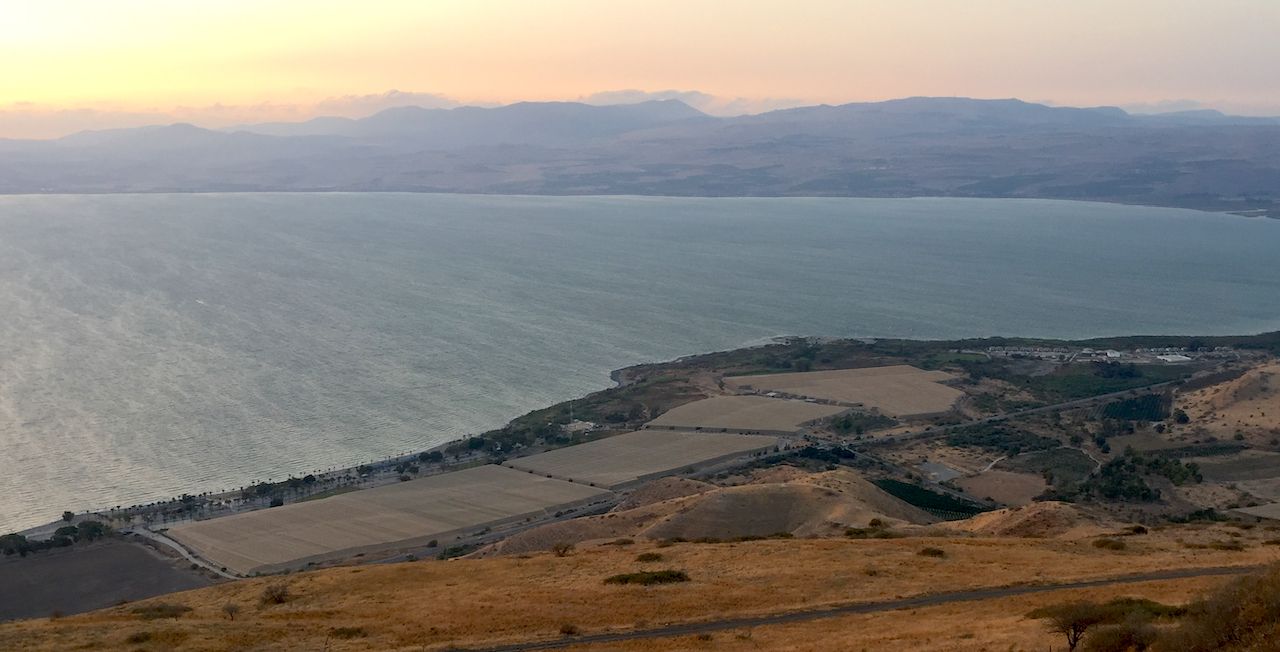 View over Kursi toward the Sea of Galilee

A friend recently asked about the geographical problem of Mark 5 so I thought I’d write up some thoughts on the topic.

The narrative in question is the healing of Legion. Jesus is in Capernaum, he gets on a boat, sails across the Sea of Galilee, ends up in a storm, and calms the water. When they arrive on the shore he gets out and is met by two demoniacs/a guy called Legion. After Jesus heals him/them, the demons are sent into a herd of pigs. These demon-possessed pigs then run headlong into the lake and, presumably, drown. It’s fair to say this is one of the weirder gospel narratives.

The healing of Legion is narrated in all three synoptic gospels; they all begin by describing where the event took place:

Matthew 8:28 “When he came to the other side, to the country of the Gadarenes, two demoniacs coming out of the tombs met him.”1

Mark 5:1 “They came to the other side of the sea, to the country of the Gerasenes.”

Luke 8:26 “Then they arrived at the country of the Gerasenes, which is opposite Galilee.”

These differences caused copyists of the gospels to perform no end of monkey-business with the sentence – there are 3 variants for each of the synoptic gospels.2 We’re looking at a genuine problem that was recognised very early.

If we accept Marcan Priority (which we do around here) then we’ve got Mark writing “country of the Gerasenes”, Luke following him faithfully, but Matthew deliberately changing “Gerasenes” to “Gadarenes” in his version of events. Why would Matthew do that?

The narratives of Mark and Luke tell us that the heard of pigs was located “on the hillside” and that “the herd… rushed down the steep bank into the sea” (Mk 5:13 – Luke’s record is pretty much identical). If you know the geography of the Sea of Galilee at all, it’s almost entirely surrounded by hills, some of them pretty steep. Interpreting the reference to “the hillside” as anywhere but the steep banks that encircle the lake is geographically problematic: the record describes a pretty short run for the pigs – their stampede was quickly over.

This is a difficulty for Mark’s account – the pigs would have had to trot many miles from the country of the Gerasenes before they even reached the hillside that overlooks the lake, never mind actually get to the lake itself. And that doesn’t fit the description we’re given of the stampede at all.

Matthew, using Mark as a source for his own gospel, appears to have been aware of this geographic difficulty. To deal with it he changed “country of the Gerasenes” to “country of the Gadarenes”:

Matthew 8:28 “When he came to the other side, to the country of the Gadarenes, two demoniacs coming out of the tombs met him.”

Why would he do that? Why swap out one territory for another?

“the villages of the Gadarenes… happened to lie on the frontier between Tiberias and the territory of the Scythopolitans.”4

So at least that part of the story adds up – the pigs could have run into the lake from Gadara’s territory. However, check out this map:

Gadara itself or anywhere relatively close to it is still quite a distance – a number of miles/kilometres. The pigs would still have had to have been long distance runners – not the picture painted for us in Mark or Luke where the herd is on the hillside close to the water.

Mt 8:30 Now a large herd of swine was feeding at some distance from them.

Let’s be clear: I know zero greek. Like, not even the alphabet. So, I’m kinda dependent on lexicons to tell me what’s what. The “at some distance” is a bit fluffy in the english – it could mean anywhere from “not far” to “miles away”. So, all a layman like me who wants to avoid “exegeting the english” can do is trust good scholarship:

It’s comforting to know that Luz translates it “But far off from them a large herd of pigs was feeding.”7 On the other hand, Newman and Stine make the astute observation that “It seems that ‘at some distance’ does not indicate a great distance, since the pigs can be seen.”8

All I’m able to say with any confidence is that Matthew felt compelled to change the location of the pigs. He could have followed Mark, but he chose to do something else.9 It seems reasonable to this layman to suggest that maybe Matthew relocated the herd because he knew enough of the geography to say that if this event took place in the country of the Gadarenes the herd couldn’t be both on a hillside and close to the shore – Gadara was around 5 or 6 miles away from the shore, and the hills that lead from Gadara to the lake are very close to Gadara and a number of miles from the lake.

So, Matthew is aware that on the face of it Mark’s account doesn’t work. He therefore took it upon himself to change the geographical details to make them more realistic. To get any further with working out where the event took place (if it took place at all) we can turn to church history.

Eusebius of Caesarea (260–313 CE10) in his Onomasticon (basically a long list of place names with explanations of their location), not content with his available options of Gerasa and Gadara Eusebius decided to add a third candidate:

Eusebius, Onomasticon, 74: Gergesa – There the Lord healed the demoniacs. Now a village is pointed out beside Lake Tiberias, into which the swine rushed down headlong.11

Gergasa, it has been suggested12, is a transliteration of Kursi, located half way up the eastern shore of the Sea of Galilee.

Scholarship seems to be split on whether Gergasa/Kursi is a viable option or not:

But, what’s the historical value of Eusebius’ claim? After all it’s not far off 300 years after the events.

Well, it seems Eusebius didn’t arrive at his “Gergesa” idea alone; it appears he may have just been following Origen’s (185-253 CE) commentary on John where we read:

Origen, John. 6.211. “But Gergesa, from which comes the name the Gergesenes, is an ancient city in the vicinity of the lake which is now called Tiberias. There is a cliff lying beside this lake from which they point out the swine were cast down by the demons.”15

That’s a pretty early source, and he’s appealing to an earlier tradition (“from which they point out…”) but whether the entry really reflects ancient tradition is hard to know.

One thing’s for sure: Gergasa, if it can be equated with Kursi, is “the most geographically plausible”16 reading. Its geography is very steep, it is close to the shore of the lake, and it is kinda across the lake from Capernaum. Geographically it’s certainly a better fit than Gerasa or Gadara.

When it comes down to it we really have no idea where the event the narratives are based on took place. It’s just one of those things. We’ll probably never find out what the real deal is, but, as usual with these things, that’s only a problem if we subscribe to the patently false doctrine of inerrancy.17

So…how did this problem arise? Was Mark’s knowledge of the Decapolis shaky? Did he just take a stab at a location that seemed possible based on what he’d heard somewhere? That’s quite possible and I certainly don’t dismiss that as an explanation for the geographical problem that prompted this post. However, I’m not alone in thinking that this isn’t the best explanation.1819 What I find a more credible suggestion is that given by Marcus in his commentary on Mark:

Although “Gerasa” is difficult geographically, it is appropriate symbolically, since the Hebrew root grš means “to banish” and is a common term for exorcism.20

If Marcus is right then here’s an oversimplified explanation of what may have happened:

Mark, wanting to make a theological point, locates the event in a place whose name is associated with casting out demons – the language, as Marcus points out, does kinda support this.21 This strengthens the exorcism theme of the pericope– seems legit. A few years later, Matthew, using Mark as a source for his own gospel, either misses Mark’s theological point or wants to achieve something else with his text and attempts to “correct” the event’s location. He deals with a remaining issue by locating the herd “some distance away” rather than on the hillside next to the lake. Around 150 years later Origen comes along, and, knowing that Matthew’s attempted fix isn’t watertight, relocates the event to Gergasa based on what is probably an ancient tradition.

Conclusion: we just don’t know where this event is supposed to have taken place.

But one thing’s for sure: wherever the event happened it was a waste of good bacon.