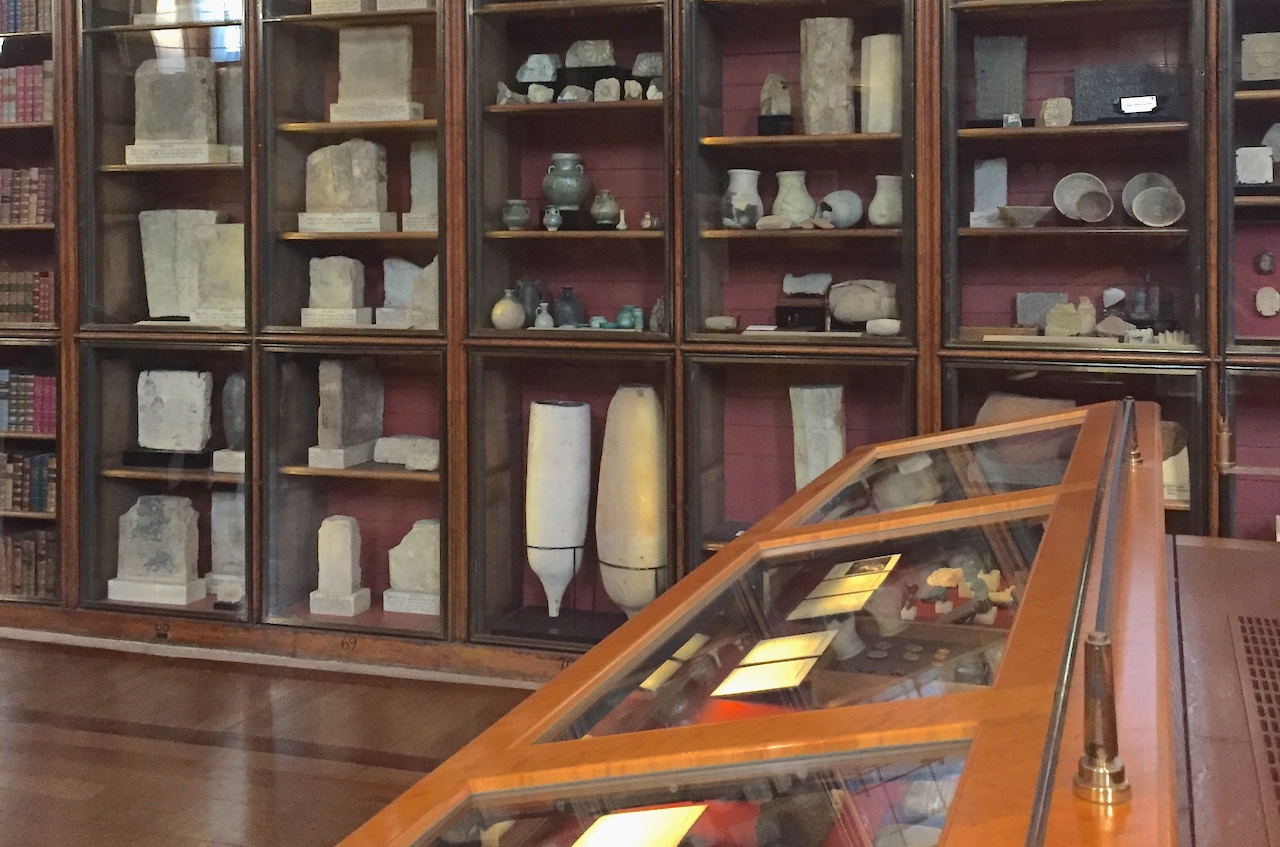 The Annals of Tiglath Pileser I sitting unloved on a shelf

No day out to the British Museum is complete without an aimless wander around the Enlightenment Gallery. Artefacts from antiquity fill the shelves, tourists stoop over treasure-filled display cabinets, and books centuries old bare their fading, waxy spines behind glass. The opulent setting transports the weary tourist to the glory days of empire, exploration, and advancement (/waves hands furiously over horrors perpetuated in this era).

Part of the gallery’s charm is that many of the items are exhibited the way they first were. The crimes against conservation are there for all to see, e.g. “Nebuchadnezzar Bricks” set in what looks like concrete painted with crude labels, bought from collectors more than a century ago. But, the most interesting items are those without labels.

One of the main items I wanted to get photos of on my last trip was the prism containing “The Deeds of King Tiglath-Pileser I” for the series on Joshua 10 and 11 that I’m in the middle of. Having looked up where it was before I arrived it wasn’t long until I found it. After tweeting about it with a little too much enthusiasm I moved on to the next things on my list.

Want to understand Joshua 10 and 11? Read this prism first. pic.twitter.com/pAZlBHXn5X

After a pleasant child-free lunch and a couple of hours in the Assyrian section downstairs the guilt set in – it was time to head home and help feed and bathe the kids.

Before leaving I popped into the Enlightenment Gallery and had a quick browse of the shelves in the area of the Nebuchadnezzar Bricks. Having prisms on the brain I noticed a few of them a couple of cabinets over. I was disappointed to find them unlabelled, but, having fought the terrible lighting to take a few grainy iPhone photos I left for the day.

On the train home I searched through the British Museum Research Collection and after a few minutes I managed to identify a few of the prisms I’d taken photos of. A couple of them were from the time of Esarhaddon, but one stood out: another Deeds of Tiglath-Pileser I prism!

In his Asshur and the Land of Nimrod1 Rassan writes about this prism’s discovery in the excavations at Kalaa-Shirgat:

“We were also fortunate enough to discover buried in the solid sun-dried brick masonry, about ten feet under ground, the annals of Tiglath-Pileser I recorded on the terra-cotta culinders, all bearing almost the same text. The first was discovered by Sir Henry Layard at the beginning of 1852; the second, exactly like it, I dug out in the following year during my own mission; and the third I also discovered at the end of the same year, on my second expedition to that ruin. This last cylinder is larger and different in shape and size from the former two; but Assyrian scholars have found that it contains the same account of the reign of Tiglath-Pileser I as the others. It records the exploits of that Assyrian king, who reigned about 1,100 years B. C., and it is one of the oldest Assyrian records yet found. These cylinders were found placed about thirty feet apart, at three of the corners of an almost perfectly square platform.”2

So, there you go. An unlabelled prism whose text is critical to a contextually-sensitive reading of Joshua 10 & 11 gathers dust on a shelf in an unlit cupboard. Next time you’re in the British Museum, look it up - It’s this one: