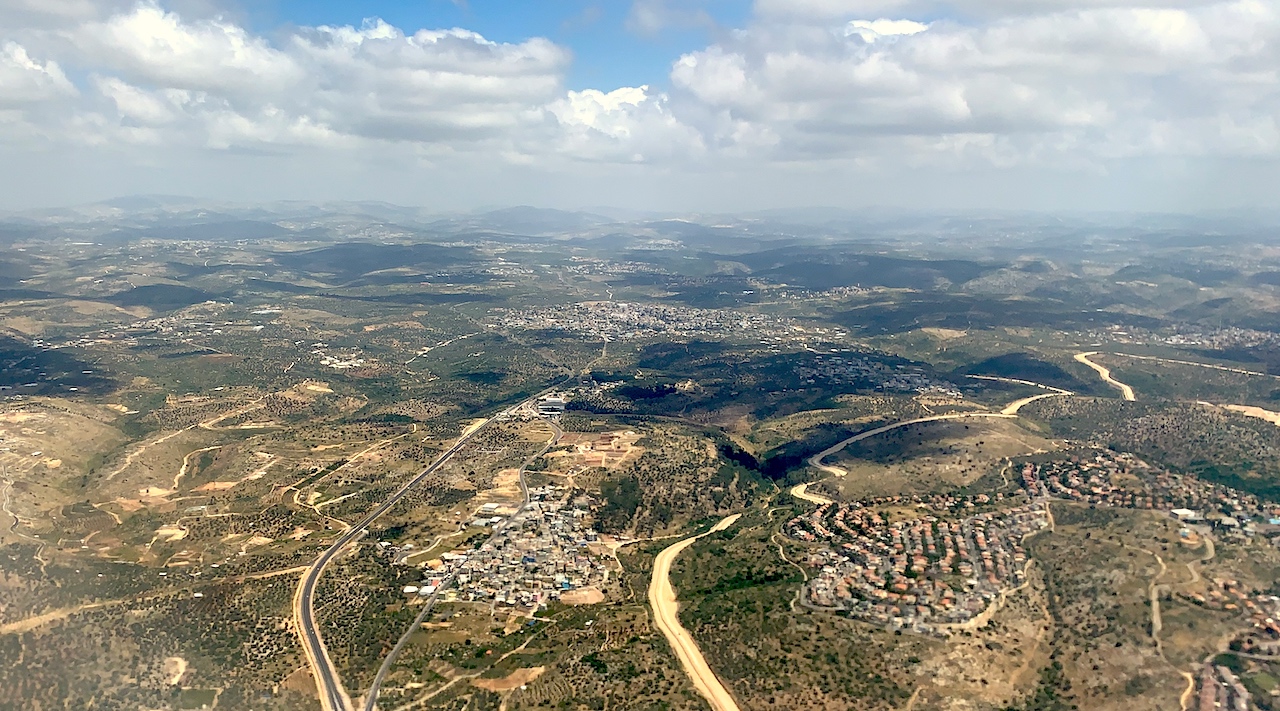 A view of the Samarian hills as seen flying into Israel

In the preceding posts in this series we’ve seen how the scriptures do not speak in one voice when it comes to figuring out exactly where the Israelites came from.

It’s felt like a whole load of deconstruction – the rosy picture painted in Sunday School has all but shattered.

From now on in the series we’re going to see what can be salvaged. What can we know about Israelite origins? In this post we’re going to look at the data for the archaeological phenomenon known as the “Israelite Settlement”, but but we’re going to start one stage before that – the Late Bronze Age population decline.

As we already touched upon in a previous post, one policy that the Egyptians put in place during their domination of Canaan was its depopulation. Redford explains:

Thutmose III carried off in excess of 7,300, while his son Amenophis III uprooted by his own account 89,600. Thutmose IV implies that he carried off the inhabitants of Canaanite Gezer to Thebes, while his son Amenophis III speaks of his Theban mortuary temple as “filled with male and female slaves, children of the chiefs of all the foreign lands of the captivity of His majesty – their number is unknown – surrounded by the settlements of Syria.”1

This “deportation of a sizeable segment of the population” was to leave “the highlands sparsely occupied”.2 The decline in population wasn’t limited to one segment of society, or to one or two areas of Canaan. Rather, as Mazar explains,

The fringe areas were deserted, and some of the sites which had been important urban centers in MB II were either fully or partially abandoned… There was also a decline in the rural settlement, particularly in the hill country. The archaeological surveys in Samaria and Ephraim have shown that the many small Middle Bronze Age agricultural settlements in these regions disappeared in the Late Bronze Age.3

The Late Bronze Age in the Judaean Highland is a void.4

Rivka Gonen has written extensively on the subject and outlines the change in pattern as follows:

Intensive archaeological surveys in various parts of the country round out the observed pattern of a significant decline in the number of sites. Whereas 270 Middle Bronze sites were counted, only 100 Late Bronze sites were found, a decrease of more than 60 percent.5

So, the number of towns and villages people lived in declined between the Middle Bronze (2000 – 1550 BCE) and the Late Bronze age (1550 – 1200 BCE). Gonen does point out that though there had been “near abandonment of the hill country”, there had been an increase in the population of the low-lying areas, “though the sites were generally small”.6

At the end of a fascinating paper in BASOR entitled “Urban Canaan in the Late Bronze Period”, Gonen summarised the data for the changing population size between the Middle and Late Bronze ages like so:

This, no doubt, indicates both a substantially smaller population [in the Late Bronze] than in the Middle Bronze period, and a breakdown of the system of medium to large city-states that formed the backbone of Middle Bronze Age Canaan.7

Finkelstein and Na’aman, in their excellent “From Nomadism to Monarchy” provide some summary data that help illustrate the point.8 Here are two graphs that focus on the hill country. The first shows how many sites there were in the hill country in the Middle and Late Bronze ages; the second shows the number of built-up hectares across the two periods in the same area.

Starting around about the beginning of the Iron Age (~1200 BCE), everything changed. Where the Late Bronze Age Canaanite Highlands saw population decline, the beginning of the Iron Age I saw a population explosion. Where for a long time there had been only crickets, hundreds of new sites appeared – a phenomenon known as the “Israelite Settlement”. Mazar begins his section on the topic like this:

Intensive archaeological surface surveys revealed an entirely new settlement pattern in Iron Age I. Hundreds of new small sites were inhabited in the mountainous areas of the Upper and Lower Galilee, in the hills of Samaria and Ephraim, in Benjamin, in the northern Negev, and in parts of central and northern Transjordan. Much of this activity can be related to Israelite tribes, though the ethnic attribution in some of these regions is still questionable.9

He then fills the next few pages with summary information about what was found in the areas listed above – it’s definitely worth a read.

The surveys Mazar refers to (“The Archaeological Survey of Israel”) were performed over a period of a few decades starting in the 1950s and involved teams of archaeologists walking every square mile of the entire country recording everything they found. During the course of these surveys many sites from the Iron 1 period were discovered bringing the Israelite Settlement to light – the archaeological evidence of the appearance and settling down of the Israelite people.

Finkelstein writes about this survey and its results in his well known book, The Bible Unearthed,

These surveys revolutionized the study of early Israel. The discovery of the remains of a dense network of highland villages – all apparently established within the span of a few generations – indicated that a dramatic social transformation had taken place in the central hill country of Canaan around 1200 BCE… In the formerly sparsely populated highlands from the Judean hills in the south to the hills of Samaria in the north, far from the Canaanite cities that were in the process of collapse and disintegration, about two-hundred fifty hilltop communities suddenly sprang up. Here were the first Israelites.10

Finkelstein makes the important point that these Iron 1 sites were almost all new villages not built on the site of older ones. We can find reference to this point in excavation reports, for example Calloway’s summary of the Iron I discoveries found in the excavations at Et-Tell (“Ai”):

The Iron Age I settlement at Ai was one of many established in the region about the same time by people who moved in and occupied abandoned sites of cities, such as Tell en-Nasbeh and el-Jib (Gibeon), or new sites such as Mukhmas (Michmas), Rammun (Rimmon), Taiyiba (Ophrah?), Raddana (Ataroth?), el-Ful (Gibeah), and many small campsites on hilltops in the area. Bethel was the only city occupied in the Late Bronze Age, and it was destroyed at the beginning of this period, so the blame may be laid upon the newcomers. Iron Age I housing and artifacts at Bethel share the general characteristics of houses and finds at the newly established sites… We may view the settlement at Ai, therefore, as part of a considerable influx of newcomers who infiltrated the area and apparently met little or no resistance.11

Dever expands on the point that these were new sites, writing,

The new Israelite settlements… are almost all founded de novo, not on the ruins of destroyed Late Bronze Age sites, but in the sparsely populated hill country extending from Upper and Lower Galilee, into the hills of Samaria and Judah, and southward into the northern Negev.12

So, where are these Iron I sites? This map from The Rise of Ancient Israel shows their distribution across Canaan:

All that’s required is a passing knowledge of Israel’s topography to see that the vast majority of the sites are in the hill country: far from the main north-south road running along the coast, far from the centres of population, and far from the best agriculturally productive land.

Let’s get into a bit more detail and look at the numbers. Expanding on our previous use of Finkelstein’s data, here are some graphs that illustrate the population decline (as we saw above) and explosion in Iron I (followed by Iron II).13

Both graphs demonstrate quite clearly the massive increase in the number of sites from the Late Bronze age to Iron I.

A slightly more sophisticated14 and up-to-date set of numbers can be found in Lawrence E. Stager’s chapter “Forging an Identity” in The Oxford History of the Biblical World. In it we find figures not just for the Canaanite hill country but for all of Cis-Jordan and Transjordan (the lands west and east of the Jordan river respectively). For both that larger area and the highlands-specific area here’s the summary data15:

Here are a couple of graphs based on Stager’s more up-to-date data:

You’ll notice that between Stager and Finkelstein the figures are different – that doesn’t matter. Though Finkelstein’s data is older, it shows the same pattern as the latest data. And that pattern is clear – a massive increase in the number of sites in the Canaanite highlands.17

Both Finkelstein and Stager translate the number of sites and their area into population figures. Here’s the data:

Here’s a graph based on them:18

Again, regardless of the fact that Stager’s more up-to-date figures are different to Finkelstein’s, the pattern is what matters: the population in the Canaanite highlands in Iron I is three times what it was in the Late Bronze age. That’s a huge increase in population.

So, these new sites… who lived in them?

Let’s repeat a few quotes we’ve already seen, and add a couple of new ones:

The continuity between many of these sites and later Israelite towns and villages of the monarchic era legitimizes the definition of these settlers as Israelites, as I have maintained since I excavated the site of Giloh in 1978, and as have many other scholars. The term “Proto-Israelites” introduced by Dever and adopted by others to designate the inhabitants of these sites is in my view superfluous.19 – Amihai Mazar

That many of these villages belonged to premonarchic Israel is beyond doubt.22 – Lawrence E. Stager

I could go on all day. We can even find minimalists who agree, even if through gritted teeth:

This development from outlaw habiru to sedentary Israelite mountain peasants took place over a couple of centuries, and can be followed directly in the archeological record of conditions in the highlands. In the thirteenth-twelfth centuries BCE a number of village societies arose in both the Galilean mountains and in the central highland (as far as the territory east of Jordan is concerned we are as yet insufficiently informed), in regions which had not been previously inhabited, as far as we can tell.23 – Niels Peter Lemche

It’s rare that practically everyone is in agreement.

So, we can safely say that the archaeological record is clear: the Israelites emerged in the Canaanite highlands at the beginning of Iron I (~1200-1000 BCE) and settled down in small villages which they built from scratch.

So… what does this mean for us?

First, let’s look at the implications for those who hold to an Early Date Exodus, i.e. one that began in 1446 BCE and ended 40 years later with the beginning of the Conquest in 1406 BCE. If this is your view, you’ve got a couple of problems:

Next, the implications for those who hold to a Late Date Exodus:

In conclusion, the archaeological record is pretty clear that the Israelites appeared in the Canaanite hill country early in Iron I (1200 – 1000 BCE) after the area had suffered a population collapse in the preceding Late Bronze age (1550 – 1200 BCE). In our next post we’ll start taking a look at the problem of where did the Israelites come from.