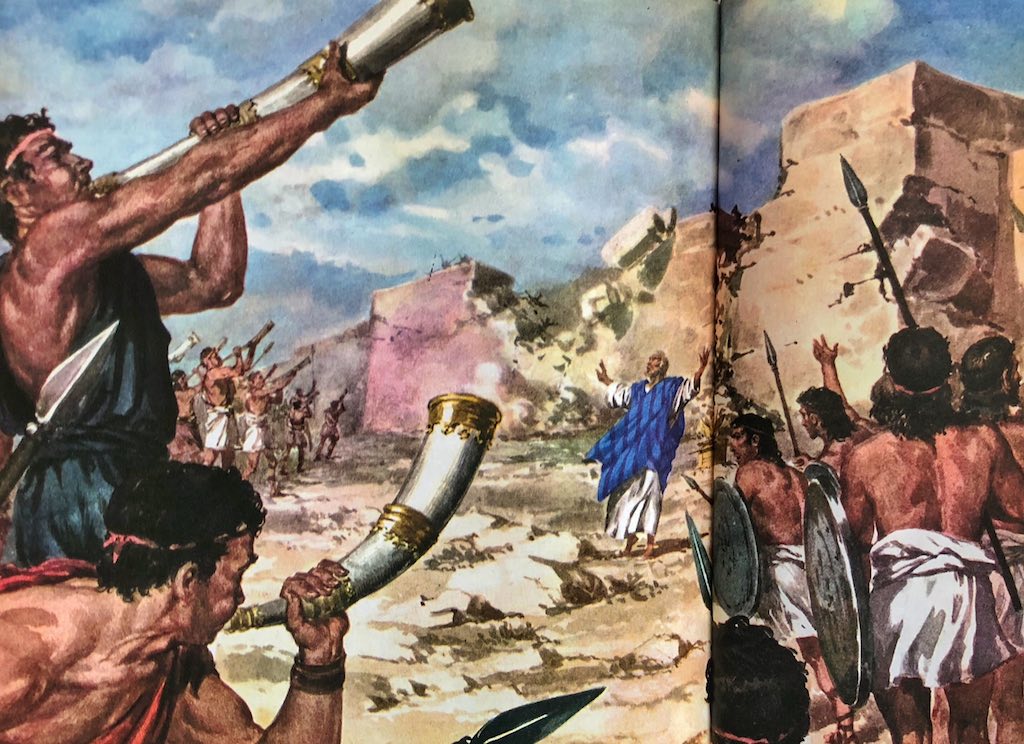 The fall of Jericho in my old Children’s Bible

Let’s remind ourselves of the story of Israelite Origins we learned in Sunday School. If your experience was anything like mine, it goes a little something like this:

The descendants of Abraham, Isaac, and Jacob multiplied in Egypt. Forced to work as slave labour on Pharaoh’s supply cities the Israelites, now a people, were led on a daring bid for freedom by Moses. Step by step through the waste howling wilderness they found their way to Mt Sinai where they met their God and received his law.

After a few decades of wandering through the rocky desert and up through Transjordan, they arrived on the plain of Moab, opposite Jericho. It was there that Moses, having lead the Israelites for 40 years, climbed to the top of Mt Nebo for a vision of the Promised Land. Having finally seen it, he died, was buried in an unmarked grave, and was mourned by his people for 30 days.

Now led by Joshua, the Israelites crossed the river Jordan into the land of Canaan. After catching up on their circumcision obligations the Israelites took Jericho, killing everyone in it but Rahab and her family. The hilltop town of Ai was next to fall; every last one of its citizens was also annihilated. Having renewed the covenant at Shechem, half the tribes on Mt Ebal and the rest on Mt Gerizim, the Israelites went back to Gilgal. After being tricked into making a covenant with the Gibeonites they soon found themselves honour-bound to defend them against a coalition of Canaanite kings. This kicked off the first of Joshua’s two campaigns, the first in the south and the second in the north that resulted in the annihilation of the Canaanite people.

Having conquered the land and being the only ones left in it the Israelites faced no opposition when they went to their tribal inheritances. They settled in houses they hadn’t built, and ate from vines and olive trees that they hadn’t planted.

The age of Joshua and the elders came to an end and the people lost sight of God and did what was right in their own eyes. Thus the cycle of the judges began. Punished for their lack of faith in God the Israelites found themselves facing hordes of plundering Midianites, Philistines, and Ammonites amongst others. Only when they cried out to God were the Israelites sent deliverers who, engaging in guerrilla warfare using torches, daggers, and jaw bones of donkeys, saved them from their enemies.

Summary: 2-3 million Israelites arrived from outside Canaan, wiped out the indigenous population, and settled in the land promised to their fathers.

That’s a lot of Sunday School right there. Of course, this narrative ignores many passages that provide a bit of nuance, tell a different story, or contradict it altogether. For example, I remember other lessons that dealt with the biblical narratives of the Israelites living amongst the Canaanites, Hittites, Amorites, Perizzites, etc, and how they worshipped their gods – the blindingly obvious contradictions between that and the main narrative outlined above where the Israelites had annihilated everyone in Canaan didn’t occur to me, and, looking back, I don’t think it occurred to my teachers either.

Don’t get me wrong – I loved Sunday School and think it’s a tremendously important institution. I have nothing but fond memories of it and I’m thankful to all my teachers for putting up with me. But let’s not think that Sunday School is the Hebrew University of Jerusalem. It’s not the place to deal with the nuance in the text and the relevant archaeological evidence.

The problem isn’t what we learn in Sunday school, it’s rather that after completing Sunday School most don’t seem to continue learning more about the bible. In my experience at least, what we know in adulthood about Israelite Origins seems to be little more than what we learned when we were children.

As adults we have the main narrative reenforced through talks on “Archaeology Proves the Bible True” inevitably delivered by well meaning but completely clueless amateurs. A small minority of self-described free-thinkers who encounter difficulties with the archaeological evidence will gravitate toward fringe material that shuffles chronologies, finds chariot wheels in the Gulf of Aqaba, or even the very statue of Joseph, all attempting to provide evidence that backs up the Sunday School narratives. But most people, instead of reading around the topic, learning a little about biblical interpretation, and how those in the ancient Near East thought and wrote about history, simply continue to take the Sunday School version at face value, reading the text with all the hermeneutical sophistication of a pious 12 year old.

And here’s the difficulty: almost everything in the Sunday School narrative on Israelite Origins is contradicted by the archaeological evidence. It’s just not how it happened. I know that sounds a bit strong, and if you take a conservative view of how to read the bible it probably sounds quite concerning, but it really is the case.

In the next post we’ll take a quick tour through the archaeological sites whose remains lead the relevant experts to conclude that the origins of the Israelites requires a different explanation than that found in scripture.